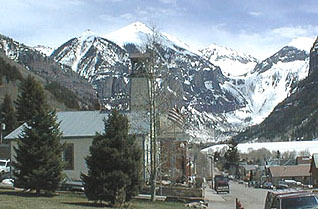 Today the sun was shining brightly in town which is always a bonus with a digital camera since they seem to a bit of a "light hog" when compared to traditional "film-based" cameras.

Here you can see the old Telluride Town Hall with Ajax Mountain off in the distance. The town of Telluride is officially considered a National Historic District, so many of the buildings (Town Hall included) date back to the early days when Butch Cassidy was reported to have made his first bank robbery in the mid 1800's. Supposedly he came over Imogene pass into town from Ouray....currently there's a foot race every summer across this dirt road which exists at elevations well over 10,000 feet. 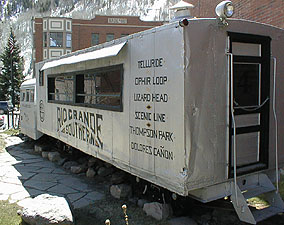 Galloping Goose is the "official" name of this relic. Not exactly sure of the entire story behind it's existence, but if I had to guess it probably dates back to the old mining days; and if the names written on the side are any indication of it's former purpose, it probably headed down to the town of Dolores (over Lizard Head Pass - which can be quite a doozy in the winter) and possibly to either Cortez or Durango Colorado.

If you happen to ever visit Durango (and even if you're not a "train buff") you can ride an old train high up in the mountains all the way up to Silverton which used to be an old mining town. 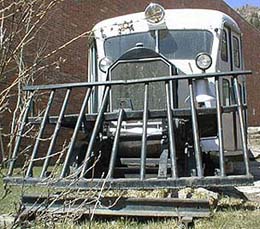 Although it probably doesn't quite resemble Grand Central Station, you'll find this ole engine parked in front of the Sheriff's office on main street just outside the San Miguel County Court House.

Since I've mentioned a little bit about my digital camera above, here's some info on the camera I'm using which I happened to shop around for quite a bit: Olympus D-300L (which can be considered on the high-end of entry level digital cameras) - 6 MB internal memory (translating into 30 pictures at high resolution [1024 x 768] or 120 pictures at standard resolution [512 x 384], you have a choice which resolution to take a picture), it utilizes 810,000-pixel image pickup element, and has a built-in flash. There's an LCD screen on the back which allows you to preview pictures seconds after they're taken - allowing you to delete photos on the spot which haven't turned out well to maximize your memory storage. It is very compact in terms some of the other digital cameras I've seen and will run on 4 AA re-chargeable batteries - meaning you can go on a long hike with two sets of batteries and come back with 30 high resolution (120 standard) photos you can be satisfied with.

If you're expecting superior quality photos in relation to your average Canon/Nikon/Olympus/etc. 35mm, you might be somewhat disappointed - invest your money in film developing and a good color scanner. If your are looking for convenience in terms of instant image processing on the go, a digital camera is a very amazing piece of equipment.

The following link provides some comparisons by PC Magazine's web page of digital camera's (it is relatively outdated - and only mentions my camera b/c it hadn't come out yet, but it does a good job of comparing and contrasting several well-know cameras):

Email Someone at Camp